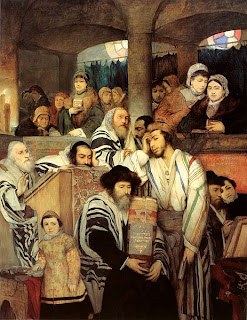 It is that time of year - when tickets go on sale for synagogues, when school is interrupted by a parade of Jewish holydays, and we plan to eat and eat and eat again.
The first event of the season traditionally is the first night of selichot. While Sefardic Jews begin reciting selichot on the first day of Elul, Ashkenizim began only last night on the first Saturday night before Rosh Hashanah. In my communities, there was a lot of grumbling about the additional 30 minutes added on to their morning tefilla time. Some people are drawn to the service by tradition; other are drawn in by the tunes used (check out this article Desperately Seeking S'lihot by Allan Nadler), others chose not go.
The above picture titled "Jews Praying in the Synagogue on Yom Kippur" often captures how I used to feel about the prospects of spending hours on end inside a shul.
It says in Vayikra 29:30:
בַּחדֶשׁ הַשְּׁבִיעִי בֶּעָשׂוֹר לַחדֶשׁ תְּעַנּוּ אֶת-נַפְשתֵיכֶם, וְכָל-מְלָאכָה לא תַעֲשׂוּ--הָאֶזְרָח, וְהַגֵּר הַגָּר בְּתוֹכְכֶם. כִּי-בַיּוֹם הַזֶּה יְכַפֵּר עֲלֵיכֶם, לְטַהֵר אֶתְכֶם: מִכל, חַטֹּאתֵיכֶם, לִפְנֵי ה', תִּטְהָרוּ
I like to call this the "Car Warsh" approach to tefilla. The pasuk reads that, "in the seventh month on the 10th of that month, you shall afflict your souls and refrain from any work; the citizen and the stranger that dwells among you. For this day itself will atone for you, to purify you, from all of your sins, and before Hashem, you shall be purified (my translation).
Indeed the Rambam discusses (in Hilchot Teshuva) that even if a person doesn't "prepare" for Yom Kippur by asking forgiveness from others or making amends to their creator, the essence of the days washes away minor transgressions and gives you a new chance at life. That is to say that even if you don't want to get forgiveness - by going through the certain motions on Yom Kippur - sitting through the sermons and clapping your chest - you can get spiritually cleaned by coming out on the other side.
I think that is a popular attitude among some worshipers that hope to get through the selcihot service believing that their attendance, coupled with mumbling of words of piyutim they don't fully comprehend, gains special points for the holiday. I struggle with this approach and how to impart a greater passion to my students that it isn't about turning the pages to get to the end of the day and that one does not have to say every word in order to attain divine forgiveness.
These are my thoughts on the upcoming Days of Awe - and hope to share some more insights from the works that I am reading. One comment that came in to the blog: Imagine a selichot service that captures the energy of a Friday night Kabbalat Shabbat?
Posted by Marc Rosenberg at 10:24 PM