Praying for a Successful Lift

The following article is ripped from the headlines of the Wall Street Journal - I am very curious as to why this is mainstream media news.  However I have to admit, whenever i do Hagbah, I do say a little prayer. 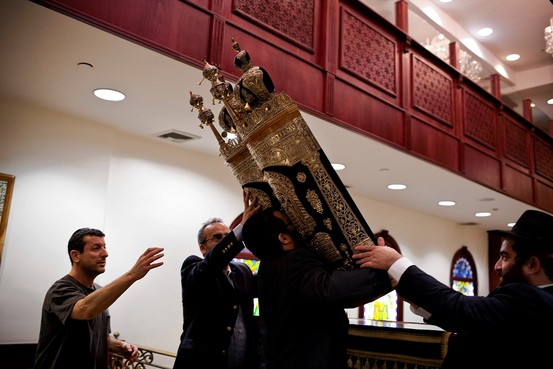 At the Manhattan Sephardic Congregation, Chalom Sibony gets a hand hoisting an elaborate scroll weighing about 60 pounds.

NORTH BRUNSWICK, N.J.—Rabbi Robert Wolkoff has a recurrent nightmare. A congregant is lifting a holy Torah scroll high up in the air when it starts to tilt toward the ground.
In the dream, the rabbi lunges forward to catch the scroll, screaming, "Watch out, watch out." Then he wakes up in a cold sweat.

Jewish congregations are struggling with the heavy weight of Torah scrolls as they look for more ways to include women and older men in the sacred act of lifting a Torah. That's prompting some to look to acquire lighter Torahs, WSJ's Lucette Lagnado reports.

It isn't all in his head.

Lifting the Torah scroll during Sabbath services—a ritual known as "Hagbah," which means to lift in Hebrew—is considered a tremendous honor. It can also be a perilous undertaking.
The average Torah scroll, which contains the Five Books of Moses, handwritten by a quill on parchment, can weigh about 25 or 30 pounds. Scrolls are mounted on long wooden poles; they are often hard to handle, and even harder to hoist. Some scrolls, encased in wood and silver, weigh 40 or 50 pounds or more.

Accidents happen, and when they do, custom calls for significant acts of contrition, including fasting. Lots of fasting.

"If you drop the Torah, the implications are dire—the shame is enormous—and traditionally one needed to fast for 40 days," says Jonathan Sarna, a professor of American Jewish history at Brandeis University in Waltham, Mass. The offender has plenty of company in hunger, as anyone who witnesses the Torah tumble must also refrain from food and drink from sunrise to sunset.

The Heft of the 'Hagbah' 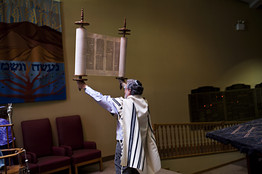 Many of these scrolls are older, and were made in Europe before World War II. They have profound emotional value—but to replace them is expensive, as a new lighter-weight scroll can cost tens of thousands of dollars.

These days, not too many at Rabbi Wolkoff's synagogue, Congregation B'nai Tikvah, get to lift the Torah scrolls. Women, in particular, have felt excluded. While this is a proudly egalitarian synagogue where women take part in all rituals, virtually none raise the heavier scrolls since the effort requires both skill and muscle. Most women aren't up to it.

"Some of our Torahs are so heavy, only certain people are allowed to lift them," says B'nai Tikvah member Barry Safeer. "There are people with bad backs, there are those who make the congregation nervous."
That is especially the case when there is an overzealous or "show off" Torah lifter. "I call them testosterone Hagbahs," says Rabbi Gerald Skolnik of the Forest Hills Jewish Center in Queens, N.Y. "It is someone having to prove how virile they are." 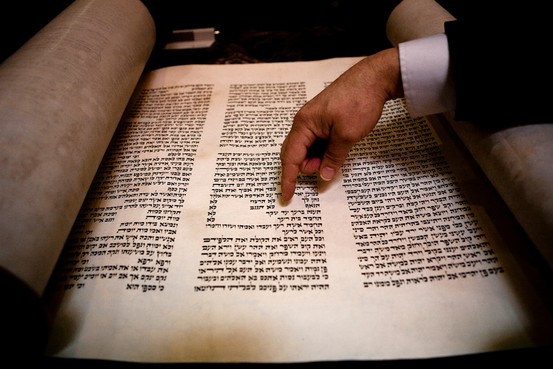 Hilary Friedman, one of the few women who has "done Hagbah," twice, is a physical trainer who lifts weights and teaches Pilates. Yet when she picked up the scrolls, she says, "I was shaking. My own child told me, 'Please, I don't want to fast for 40 days!'" She says she watches older "deconditioned" men lift the scrolls high up over their heads and wonders how they do it. "I will tell you, it is their sheer faith which lets them get it up there," she says.

Rabbis tell horror stories about the time a Torah fell or tore under their watch.

Rabbi Daniel Sherbill of Temple Emanu-El in Miami Beach, is still haunted by that day in 1995 when a scroll tumbled to the ground after its ornate housing, or "ark," was opened.  It was the High Holidays, and he was leading a congregation near Chicago. Dozens of members fasted for 40 days, from sunrise to sunset, he says. Beth El-Atereth Israel, a modern Orthodox congregation in Newton, Mass., lived through its disaster in 2007 during Simchat Torah, a holiday when Jews dance with the scrolls. A congregant carrying a bulky Torah tripped and lost control.

Rabbi Gershon Segal opted for the more modest penance—one communal fast day along with prayer and charitable giving. Then he took precautionary measures. He installed a bench within easy reach so that scroll lifters overcome by the weight would have a ready refuge.

Rabbi Wolkoff has decided to take more dramatic steps. Besides being heavy and unwieldy, B'nai Tikvah's Torah scrolls are in disrepair. The synagogue concluded a new scroll was urgently needed. A committee has searched and debated for months on what to buy, from whom and for how much.

Almost everyone agrees the congregation's new Torah must be super-light, just 10 to 15 pounds. Yet when it comes to Torah scrolls, less is often more. 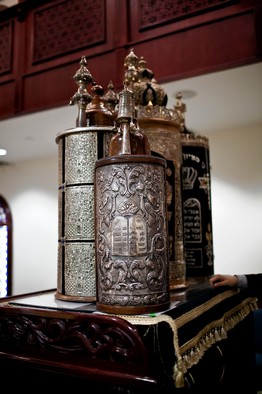 "When you are buying a Torah, on the one hand, you are buying this commodity, like a house or a car. But it is also a sacred act," says Rabbi Wolkoff.

B'nai Tikvah's committee has been quoted a dizzying array of prices—$35,000, $40,000, $60,000, all the way up to $120,000. The lighter or smaller the Torah, the heftier the price tag, especially if a fine parchment is used. Rabbi Wolkoff says lighter scrolls can cost $10,000 more than a conventional, heavy scroll.
The reason: Torahs aren't printed like ordinary books or Bibles. Often made in Israel, they are created by scribes who toil, feather quill in hand, for up to a year to produce a single scroll. Torah "brokers" typically arrange a match between congregations and scribes. They set the price, pay the scribe—and pocket the difference.

Rabbi Shmuel Miller, a Los Angeles scribe, says he charges $40,000 to make a normal-size, 22-inch scroll. But a pint-size scroll about 12 inches tall, with elaborately styled Hebrew text, "can take a few more months of work," he says, explaining how the smaller characters require a slower, more careful hand.

Rabbi Zerach Greenfield, a broker and scribe who shuttles between New York and Israel, counters that it is no big deal to produce a light, readable scroll. Rabbi Greenfield has provided scrolls weighing five pounds to U.S. military chaplains. Nowadays, he says, some parchment can be much lighter. He is confident he can deliver a quality 12½ pound scroll for approximately $30,000.

Others think the weight issue is a bit of a tempest in a Kiddush cup.

"The issues with the weight of our Torahs have become mythic," remarks Philip Welsher, a synagogue member who is an adept Torah lifter and seems to carry even the heaviest scrolls with ease. He believes more women at B'nai Tikvah could lift them if they only tried.

"I am not a wimp," says member Bobbi Binder, who has done Hagbah once or twice with a smaller scroll, but has been loath to try again with the larger Torahs. "It is not fair" that women can't enjoy the honor of Torah-lifting, she says.

Other congregations aren't sweating the issue.

"We are a young congregation," he says. "We have a bunch of guys who came out of the Israeli army."

Write to Lucette Lagnado at lucette.lagnado@wsj.com