This is an interesting perspective from The Atlantic on the human reaction to the tragic events in Boston.  I wouldn't exactly call tefilla in this situation a meme - I rather think this is a very post-modern/borderline cynical commentary of tweets and posts on facebook - but there is something here about the pattern of human reactions in times of crisis.  One could apply the aphorism about there being "no atheists in a foxhole" to communal thinking in wake of a tragedy; I personally believe that the miracles do not make believers out of people (and have a biblical argument to support this theory) and rather think that the desire to pray reflects a deep emotional want of people, and the context brings this out.
_________________________________________ 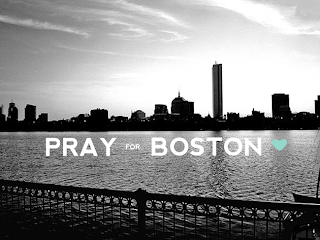 After the news broke Monday afternoon that two bombs had exploded at the Boston Marathon finish line, prayer flooded my social media feeds. "Thoughts and prayers for folks in Boston," a former colleague posted on Facebook. "Pray for Boston," another friend wrote, echoing a popular Facebook page, Twitter hashtag, and image meme.

It was jarring. There was the weirdness of seeing so many references to the divine in spaces normally reserved for vacation photos and article links and quips about the news. It was tempting to think that all the social-media-fueled "prayers for Boston" somehow degraded the idea of prayer. As one Facebook commenter wrote on the Pray for Boston page: "Do you want me to DEFINE prayer? A solemn request for help or expression of thanks addressed to God or an object of worship. Prayer is solemn. Not a 'like' on facebook."

It was also strange to see so many non-religious friends talking about prayer. The majority of my Facebook friends who wrote about praying aren't especially observant. Maybe they go to church or synagogue on holidays, but not regularly—and they certainly don't post about prayer under normal circumstances.

Odd as the deluge of prayer-related status updates seemed to me, many of them were just high-tech versions of an ancient phenomenon: faithful people reminding other faithful to pray. The Bible is obsessed with prayer. From Genesis to Revelation, variations on the word appear more than 300 times. The Hebrew scriptures describe people praying for strength, for babies, for deliverance from slavery, for food. In the Gospels, Jesus tells his followers how to pray (using the simple, straightforward words of the so-called Lord's Prayer) and how not to pray ("you must not be like the hypocrites"). In Paul's letters, we see the closest analogues to this week's "pray for Boston" tweets: constant reminders to pray. "Pray without ceasing," he tells the Thessalonians. "Be constant in prayer," he writes to the Romans. To the Ephesians he says, "Pray in the Spirit on all occasions with all kinds of prayers and requests."

Churches have carried on this tradition of encouraging each other to pray, through prayer letters and prayer phone chains and prayer breakfasts and prayer groups. With that context in mind, Facebook shouldn't cheapen prayer any more than the Postal Service or the telephone does.

"Social media platforms are merely a means of communication," Russell Moore, president-elect of the Southern Baptist Convention's Ethics & Religious Liberty Commission and an active Twitter user, told me. "Asking for prayer via Twitter or Facebook is no different than calling someone and saying, 'We should really pray for this.'

But what I saw on Twitter and Facebook in the hours after the Boston bombings and the Texas explosion wasn't just faithful people reminding other faithful people to drop everything and pray. It was also the non-religious invoking prayer in a way that they wouldn't under normal circumstances.

At first, this kind of prayer also appears to be nothing new. It seems to confirm the old, disproven "there are no atheists in foxholes" myth—that when confronted with death and destruction, even a hardened skeptic is moved to seek God.

"As a Christian, I would see it as an evidence of a natural human understanding of dependence," Moore said. "People who live their lives with an illusion of independence and self-sufficiency, when a crisis happens, are often driven to prayer, or at least to call upon people to pray...I think that's a natural reaction."

It is a natural reaction for some. I grew up in Manhattan, and September 11th, 2001 was the second day of my senior year of high school. Though I didn't believe in God at the time, I found myself saying, "God bless you" to my friends as we parted ways that day, and in the days that followed. That faint, involuntary urge to call on God's name soon grew into a desire to read His word and then a hunger for friendships with people who believed in Him. Two years later, I said out loud what I knew in my heart was true: "I am a Christian."
But I'm not sure that's really what's going on here. I don't think the outpouring of post-Boston social-media prayer was fueled by a bunch of people who, in the face of tragedy, are suddenly eager to seek God. As Elizabeth Drescher writes in a well-done piece at Religion Dispatches, it didn't take long for the "pray for Boston" meme to die; it was soon replaced by other, more practical sentiments. I noticed that, too. Here it is in graph form—check out how quickly the phrase "pray for Boston" surged on Twitter on Monday, and then how quickly it fell: 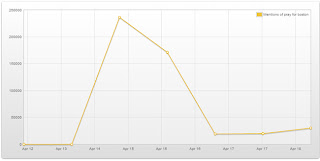 My friends who wrote of praying on Monday night soon began thinking about Boston, or standing with Boston, or loving Boston. It's interesting to see what words besides prayer have emerged as the way to respond to and process the terrible things that happened, and continued to happen, in the city.
Drescher believes #PrayforBoston rose and fell so quickly because the prayers were never really about religion in the first place. They were more reflections of temporary anxiety and sadness than a lasting call to pursue belief:

Obviously, we can reasonably conclude, prayer memes shared in times of crisis do something besides expressing traditional religiosity, calling us to God, to regular spiritual practice, or to worship. Rather, in an increasingly secularized America...praying or calling for prayer in times of tragedy seems to mark a kind of existential angst, sorrow, or confusion for which other words or gestures seem inadequate.

Though Twitter and Facebook make it easier to witness those fleeting moments of prayerfulness, they're not all that new, either. A 2002 Gallup report on religious belief in the wake of Pearl Harbor, the Vietnam War, the first Gulf War, and September 11th concluded, "Public perceptions of religion's importance in society tend to spike following crises, but those perceptions are often short-lived, and don't frequently translate into behavioral changes." As an example, the report says that religious observance increased the week after September 11th, but by December it was back to normal levels. The same pattern played out this week, only much faster.
Posted by Marc Rosenberg at 3:00 AM