A Diatribe Against the Sad State of Tefilla

Thank you Jewish Press for sharing with us what could be perhaps the greatest modern diatribe against the current state of communal tefilla that I have seen. I really should thank my goggle alerts for picking up Communicated: Tefilla by Moshe Yosef Werzberger (in the Jewish Press's defense, it is paid promotional content). 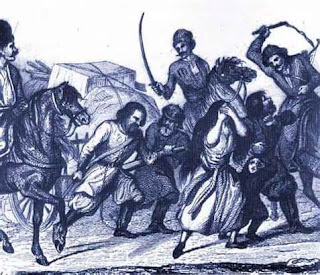 The caption to this picture stated: "The Tosfos Yomtov was convinced that the death of 300,000 –600,000 Jews during the Chmielnicki massacres of 1648-49 were because of improper Tefila."

If you want to get riled up either about the present neglect of davening or an abusive generalization of God's guidance of our world, read the whole entire article. To tease you, here are some excerpts:

Posted by Marc Rosenberg at 9:26 PM