Is it OK to Talk during Davening?

The following is a long and in-depth looking into why people talk during davening.  Written by Irving N. Levitz PhD, it is titled: Talking During Tefilla: Understanding the Phenomenon?  I do NOT recommend that you discuss it during shul (sort of creates a paradox) but it is definitely a worthwhile read.

The author thoroughly covers the factors that lead to ongoing chatter in shul despite the obvious prohibition - I anecdotal have noticed a direct correlation between shuls that have "no talking" signs prominently displayed the higher amount of chit-chat during the tefilla. 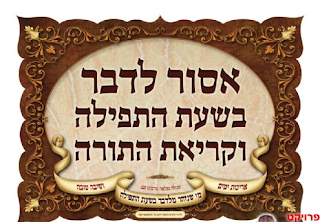 While I mostly agree with the proposed steps to change the atmosphere of davening in shuls, I think there is a significant lack of rigor or desire exists to implement them.  I also fear that the author agrees with me; note the final sentence:


For those who believe that the Final Redemption is dependent on halachic standards of communal prayer, redemption itself may have to wait until the collective conscience of the Orthodox community can be awakened to feel a discomfort with the current norm, and a determination to change it.

I will be thinking of this article every friday night when we chant:

Rouse yourselves, Rouse yourselves
Your light is coming, ruse up and shine
Awaken! Awaken! Utter a song
The glory of Hashem is revealed upon you
Posted by Marc Rosenberg at 10:37 PM