Prayers from the (Sacred) Trash

I am currently reading Sacred Trash; The Lost and Found World of the Cairo Geniza written by Adina Hoffman and Peter Cole (published by Nextbook 2011).  Fascinating stuff, moderns combing through ancient texts. 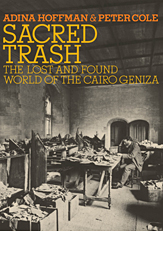 Last night I came across the following passage that I felt compelled to share here.  In reviewing part of the saga of the discovery and analysis, the authors tell how one scholar (Davidson) finds a text with both Greek and Hebrew letters and identifies an important Hebrew text as a piyyut.  This leads to explanation of rich history of such a poetic tradition which enriched the prayer service in the late fifth century ce:


However exotic or ingrown their compositions might seem by our own standards, at their best payyetanim produced real poetry, sometimes of a major sort.  A vast allusive range; a feeling for dramatic possibility; an ability to extend scriptural narration; a varied repertoire of virtuoso musical strategies; and above all a developed sense of the tradition's homiletical potential and the congregation's hunger for the nourishment it might afford - all these were used to intensify the liturgical moment, to suck marrow from the seemingly dry bones of routinized prayer and to make it matter afresh, as the Mishna demanded: "Whosoever makes his prayer a fixed task," it cautions, "his prayer is not a true supplication." Other sources echo that call: "One's prater should be made new each day," the Palestinian Talmud tells us, and "As new water flows from the well each hour, so Israel renews its song." Extending that notion, other writes still have likened the payyetanim to angels, which - according to one midrash - are created by God for specific missions and vanish after completing them.  (p.110)

I have written previously about the concept of a trained mavens which reaches back to this tradition of the payyetanim, but is clear that our davening today has disconnected from such colorful flourishing (except for maybe Friday night davening).

One final comment - interesting that 1500 years from now, scholars might actual find bar-mitzvah tapes or CD's to hear the sounds and trop used during our davening and song, but we are restricted to the visual image of this poetry without the pleasure of the sounds and effect it had.  Sad and fascinating.