Today is a US federal holiday in honor of Rev. Dr. Martin Luther King Jr. - a man known as much for his oratory skills as his prayer prowess. 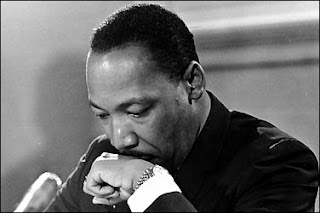 Prayer was a wellspring of strength and inspiration during the Civil Rights Movement. Throughout the movement, we prayed for greater human understanding. We prayed for the safety of our compatriots in the freedom struggle. We prayed for victory in our nonviolent protests, for brotherhood and sisterhood among people of all races, for reconciliation and the fulfillment of the Beloved Community.

For my husband, Martin Luther King, Jr. prayer was a daily source of courage and strength that gave him the ability to carry on in even the darkest hours of our struggle.

I remember one very difficult day when he came home bone-weary from the stress that came with his leadership of the Montgomery Bus Boycott. In the middle of that night, he was awakened by a threatening and abusive phone call, one of many we received throughout the movement. On this particular occasion, however, Martin had had enough.

After the call, he got up from bed and made himself some coffee. He began to worry about his family, and all of the burdens that came with our movement weighed heavily on his soul. With his head in his hands, Martin bowed over the kitchen table and prayed aloud to God: "Lord, I am taking a stand for what I believe is right. The people are looking to me for leadership, and if I stand before them without strength and courage, they will falter. I am at the end of my powers. I have nothing left. I have nothing left. I have come to the point where I can't face it alone.

Later he told me, "At that moment, I experienced the presence of the Divine as I had never experienced Him before. It seemed as though I could hear a voice saying: 'Stand up for righteousness; stand up for truth; and God will be at our side forever.'" When Martin stood up from the table, he was imbued with a new sense of confidence, and he was ready to face anything.

--Coretta Scott King from "Standing in the Need of Prayer" as published by The Free Press, a division of Simon & Schuster.

Posted by Marc Rosenberg at 9:41 PM