It is very interesting to see the mainstream media outlets commenting on the topic of prayer. It just so happens that the lightening rod for the new tefilla trend is none other than Denver Broncos starting quarterback Timothy Richard Tebow (#15). 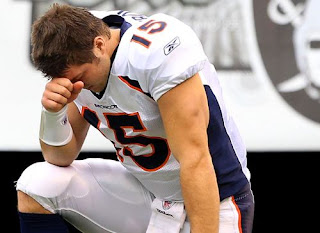 Like football or not, it is very interesting to see how people react to prayer in the public sphere.  Additionally since the quarterback is in such a central position, it is fascinating to see how people in 2012 are encountering a proud Christians openly praying in an otherwise post-modern arena.  (Some columnists ask, what if Tebow was a Muslim?)

There is a lot to talk about here: such as, Does God Care Who Wins Football and what strength is taken from those that employ public prayer to further their professional goals.  On the meta-level, we can see how such prayer elicits a powerful reaction to the extent that it has become a trending topic on ESPN, the twitter world, and even the nightly news.  Do people today know how to handle people of faith outside their natural sanctuary? Are there people rooting against Tebow so as to prove that his prayers powers don't work?  (See the Saturday Night Live skit). Perhaps we will see this Saturday.

I don't have more to add on this topic, except to say, isn't the alienu prayer a bit like the Tebow bow?
Posted by Marc Rosenberg at 11:41 PM